How We Got Engaged 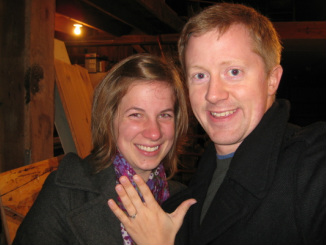 Moments after John proposed inside the barn!
The story actually begins all the way back in October. I was driving John crazy trying to figure out when he was going to propose (my bridesmaid Ashley can attest to this!), and he finally reached out to my Maid of Honor, Kyle, to try and devise a solution.  Kyle pretended to accidentally tell me that John was planning a surprise trip to Chicago in January and he would propose while we were there. So sneaky! I bought their little plan and somewhat backed off from pestering him.  John would disagree and tell you that it made no difference whatsoever! Haha- nonetheless, I was not suspecting a proposal until after we rang in the New Year.

On Wednesday, December 21, 2011 John and I were at his parents house to celebrate Christmas.  We were going to drive out to Chicago the next morning to meet up with his Aunt and Uncle from Wisconsin.  Since the talk of a wedding was already in the air, I wanted to go out into his parents barn to take a few pictures because we had been considering getting married there.  As we were getting ready to go outside, John ran up to his room with his suitcase, but I thought nothing of it.

While I was taking pictures and envisioning our big day, John said, "Laura I'm so happy I met you" and "I can't wait to marry you". Had I known he was about to propose, I would have paid a lot more attention! His dad kept popping in and out to help with wedding ideas (he thought John was going to propose when we were all in Chicago the next day) and after a few minutes John told his dad to go inside.  I was about to tell him that he shouldn't be so abrupt with his dad when I realized he was looking at me funny.  He put his hands in his pockets and since he had been teasing me for months about being engagement crazy, I told him it wasn't nice to play tricks on me.  He smirked, and got down on one knee.  I said, "John shut up this isn't funny at all!" and then he pulled out the ring!!!  Of course, I immediately burst into tears and said "You're serious!?" about a thousand times.  He asked me to marry him, and we all know what I said! The next few hours were a whirlwind of calling family and friends and staring down at my hand.  It was such a wonderful day!